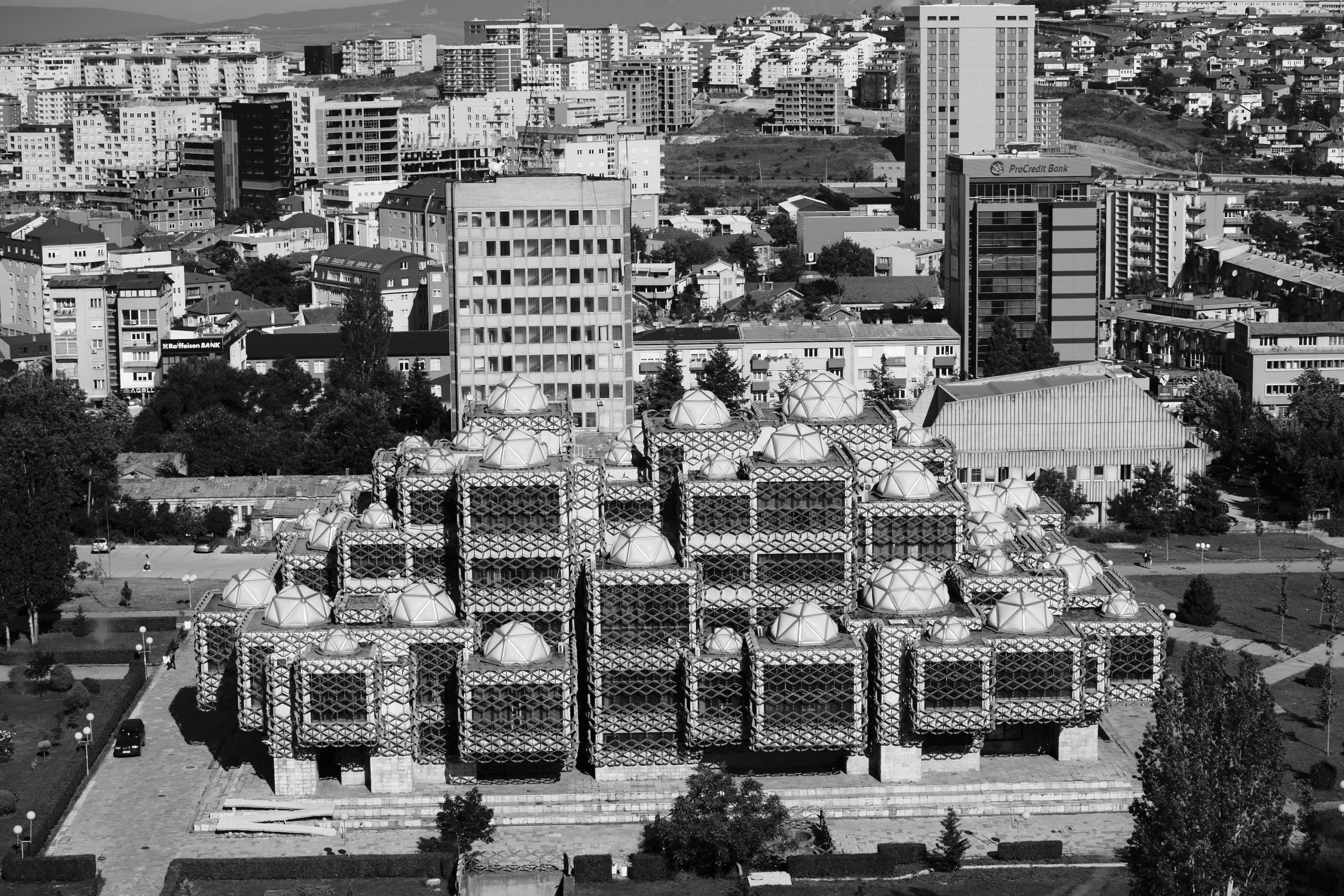 Kosovo Architecture Foundation was one of the recipients of the prestigious Getty Foundation “Keeping it Modern” 2016 grant for the development of the Conservation and Management Plan for the Kosovo National Library.

In late 2015 KAF became concerned with the deteriorating condition of the Library and contacted the Kosovo Ministry of Culture, visited the site and initiated the search for funding. After the visit to the site with Martino Stierli, the Getty Foundation and their “Keeping it Modern” grant program seemed ideal.  Together with Architect Rand Eppich, a grant proposal was written and circulated. This was submitted to the Getty and cumulated in the successful grant and inclusion in the list of buildings for 2016.

It has been our privilege to work toward the conservation of the Kosovo National Library – an icon of modernity and a significant building for Kosovo. Through this project we have been able to assess its condition as well as educate young professionals and the public and to make aware its significance to Prishtina, Kosovo and the World.

About the Getty Foundation – Keeping it Modern Grant

Today this modern architectural heritage is at considerable risk. The cutting-edge building materials and structural systems that define the modern movement were often untested and have not always performed well over time. Heritage professionals do not always have enough scientific data on the nature and behaviour of these materials and systems to develop the necessary protocols for conservation treatment.  To address these challenges, the Foundation developed Keeping It Modern, an international grant initiative that continues our deep commitment to architectural conservation with a focus on important buildings of the twentieth century. Keeping It Modern will support grant projects of outstanding architectural significance that promise to advance conservation practices. Grants focus on the creation of conservation management plans that guide long-term maintenance and conservation policies, the thorough investigation of building conditions, and the testing and analysis of modern materials. In select cases, grants may support implementation projects that have the potential to serve as models for the conservation of other 20th century buildings. Keeping it Modern website

About the J. Paul Getty Trust – Mission and Vision

The J. Paul Getty Trust is a cultural and philanthropic institution dedicated to the presentation, conservation, and interpretation of the world’s artistic legacy.

Through the collective and individual work of its constituent programs—the Getty Conservation Institute, the Getty Foundation, the J. Paul Getty Museum, and the Getty Research Institute—the Getty pursues its mission in Los Angeles and throughout the world, serving both the general interested public and a wide range of professional communities in order to promote a vital civil society through an understanding of the visual arts.

The Getty and its four programs are dedicated to the proposition that works of art are windows onto the world’s diverse and intertwined histories, mirrors of humanity’s innate imagination and creativity, and inspiration to envision the future.

To this end, the Getty works to:

Few modern buildings connect the past and present as flawlessly and span multiple cultures as expressively as Kosovo’s National Library in Prishtina. Reflecting on the region’s diverse heritage and distinct cultural spirit, Croatian architect Andrija Mutnjakovic (b. 1929) sought to create an authentic national architectural expression when he designed the building in 1971. Constructed with in-situ cast concrete, marble floors, and white plastered walls, and topped with 73 translucent acrylic domes, the library is reminiscent of buildings from Byzantium and the Ottoman Empire. Despite its unified historic forms, the structure is unmistakably modern. Mutnjakovic used new materials to evoke ancient architectural tropes, most notably the exterior aluminium lattice-wrapping, which can be interpreted either as a fishnet or a veil pointing to the area’s two predominant religions. Although reception of the design was mixed when the library opened in 1982, the building is now regarded as an extraordinary example of late Yugoslav modernism and a beloved space in the community.

While the building’s interiors suffered damage during the Kosovo War (1998–1999), its exterior escaped the conflict relatively unharmed. However, over the past several years, the building has begun to show signs of aging, most evidently though water ingress that required ad hoc repairs. Moving forward, a team of conservation specialists addressed the lack of knowledge about the building, studying and assessing its performance with the support of a Getty grant. They analysed every aspect of the building, including consulting with the architect on historic documents and his own personal knowledge of the design. Their research created a comprehensive record of the building’s past and current conditions, which resulted in the preparation for the nomination of the library as a national cultural site. This project will serve as a model for modern building documentation in the region and will be shared with the public through an exhibition and a documentary. The project also raised awareness for preserving 20th century architecture through a series of workshops for students and young professionals in the field.

This Conservation Plan is only the first step and is intended to guide the future activities, investigations and prioritize interventions. It describes the condition of the Library, assesses the damages and their severity as well as surrounding features that contribute to its current state.  It also includes a values assessment and a statement of significance. The above also formed the foundation for the nomination of the Library as a national landmark.

This conservation plan is the result of a large and dedicated team of architects and students. For one year from August 2016 the extended KAF team explored, documented and assessed every corner of the library with the intent to discover its vulnerabilities. During the year the KAF team and its collaborators, while producing the CMP book have undertaken a Rapid Condition Assessment report, a workshop with young professionals and students of architecture, a documentary, an exhibition, a specialized tour of the Library, as well as produced the application documents designating the Library in the Permanent Protection List of Cultural Monuments in Kosovo.

During the 1960’s the Albanian population in ex-Yugoslavia, which was the third largest ethnic group, still didn’t have a University in its language.  Although higher education institution existed in Kosovo since 1958, they were part of Belgrade University and all instructions were in Serbo-Croatian.

As the demands for greater autonomy and self-governance by the Kosovo Communist League grew in the 60’s, which were followed by extensive protests throughout Kosovo in 1968.  The Yugoslav Government granted the request for the creation of the first Albanian speaking University in Yugoslavia.  Although the creation of the Prishtina University was seen as a sign of prosperity and education by the ethnic Albanians, this was strongly opposed by local Serbian members of the Communist League.  The first faculties to be established in the newly formed University were engineering, medicine, law and philosophy.

As the needs to accommodate the new University were immediate the local government moved fast to allocate space and funds for the University campus and the students dormitories.  Bashkim Fehmiu was the first architect and urban designer at that time in Kosovo was commissioned to draft the masterplan for the new campus.  Fehmiu earned his diploma in architecture engineering in 1958 in Belgrade was the founder of the Prishtina Planning Institute which became the single most important planning institute in Kosovo.

Although he was given a very short period of time to come up with the design for the new campus, Fehmiu who was a regular CIAM delegate drafted a met like structure that would accommodate all the newly formed faculties in the campus.  The campus where the main faculty buildings were interconnected by long corridors, in its core had a central square which had two main architecture structures in the campus, the amphitheater and the library. Fehmiu envisioned that the built structures would be of a modular character that could expand if needed and would also have domes so that the inner spaces would be filled with zenithal light.  For the planning of the Prishtina Campus Fehmiu was consulted by Bogdan Bogdanovic, and was assisted by Rexhep Luci, Miodrag Pecic, Ranko Radovic, Dimitrije Mladenovic.

In 1970 the city of Sarajevo organized a competition for the design of the new “People’s Library” that would serve the city and the university. There Fehmiu saw a perfect match for the project of the Kosovo University Library. A young Croatian architect, Andrija Mutnjakovic, proposed an interesting concept that was inspired by architectural features commonly found in these regions religious buildings, the cube and the dome.  Fehmiu managed to convince the local leaders as well sa the director of the Kosovo National Library to commission the young Croatia architect for the job as his design fitted well with the overall campus concept Fehmiu developed.  Mutnjakovic was given a project brief and the campus masterplan and was asked to produce the concept design that would follow the guidelines set by Fehmiu’s masterplan.  Mutnjakovic’s concept for the library, although not supported by all, received great support from the local architecture community as well as the Library Director Ismet Spahiu and Bashkim Fehmiu.  Following is the unedited narrative developed by Mutnjakovic on the concept for the Kosovo National Library.